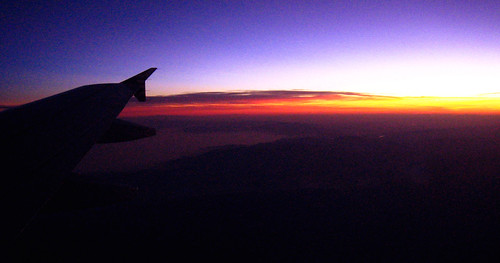 I’m actually going to be in San Francisco for two separate trips this month. I’m here now as part of a surprise birthday thing for my friend Brian (or “bean” as everyone calls him). We all came up to S.F. from L.A. met up with some of out other S.F. based friends at the Zeitgeist last night to surprise him. He thought he was spending a quiet weekend in S.F. with his girlfriend… little did he know he’d have to put up with us for the night.

He was actually surprised, he had no clue. We were even more surprised that he really was surprised. We had figured someone would have let the cat out of the bag seeing as how many people knew and it was planned about a month and a half in advance.

So far on this trip I have bought way too many sweets, and have lots left over. I think I’ve changed my spending habits to focus more on food rather than clothing and accessories. This is due to the issue of producing  waste that I talked about in a previous entry. I know with food at least I’m not producing harmful waste – that is, not that I know of… it might be a by product of the food that is made for me.

One thing I love about this city is that even places that aren’t marketed as “environmentally friendly” eating establishments still are. What I mean is that on Friday I went to Bistro Burger for lunch, got a burger and fries to go and they use recycled paper boxes instead of Styrofoam. At Zeitgeist they were using the new bio-degradable cutlery that I’ve been reading about recently on TreeHugger and GLiving. These aren’t some hippie, health food joints yet everyone in this city is already so eco-aware that it’s just normal practice for them to take that extra step.

So anyway, I’m off to visit more friends, eat more food, and look for those damn organic jeans until I have to leave tomorrow morning.

Unfortunately, I missed most of W.E.W.’s set, I had been rather looking forward to seeing him since I had listened to a few of his songs earlier in the day and it sounded like something I might like. Turns out, he was an artist that I would like. Ted Leo wasn’t that great. I’m not really a fan but I wanted to see what they were like live because in my experience, most bands are much better live. So I was trying to get into Ted Leo and The Pharmacists by listening to them on Hype Machine and it just wasn’t happening so I thought maybe if I saw them it would be different. Not so much. : /

Ted Leo and The Pharmacists 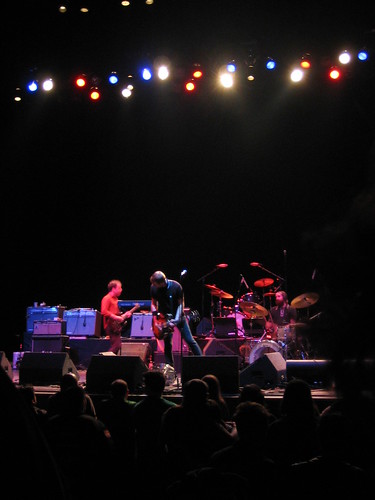 The Pogues were fucking awesome. I hadn’t really listened to them either. I mean I have some albums that a friend sent me and I had been trying to get into them as well. I really like Fairytale of New York but that’s only because I’d heard the Stars cover version first.

I think the reason I didn’t really “get” them is because it’s one of those things where people describe a band to you, and then you try to get a feel of their music and “scene” through the description of others but for each person the music is a different experience and I think I was trying to adopt the feelings of others instead of building my own. I think that’s what really allows one to appreciate a band or musician. When I actually saw them play it was something else completely to me.

So seeing them last night was great. The music really finally clicked with me and it was like I was finally hearing what I needed to hear instead of what other people were telling me to hear.

BTW, The Pogues are dressed as a mariachi band 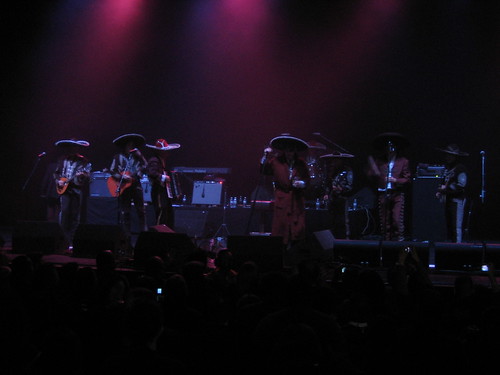 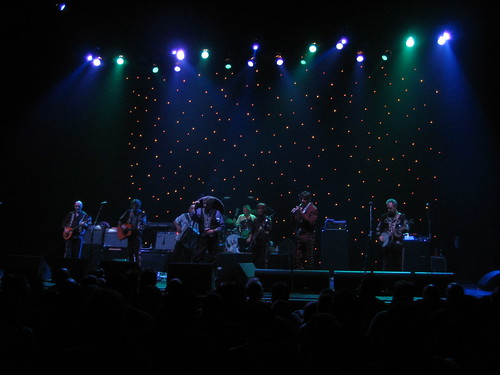 Anyway, great show. Great way to spend Halloween. Well, that is aside from rude, drunk guy who I tried to sort of pick a fight with. What?! He was being an asshole and nobody else would say anything to him! His girl finally gave him enough of a glare and cold shoulder that he focused his attention on trying to appease her – I think that’s what happened anyway. I didn’t want to turn around and watch. Then there was the scramble of trying to get home after the show. That was cool.