These bikes came up in my Google Reader today, via Design Sponge. Usually I’m not one for cruisers but these bikes are too irresistable to well… resist! They remind me of bikes used as transportation in old European cities, the kind with cobblestone streets that you can ride down with bike baskets filled with Italian food or French fromage. The kind of streets that are wide enough for about one and a half cars. Where said cars park a little on the street and a lot on the sidewalk. The kind of streets where tiny old ladies walk around carrying baskets of bagguettes or flowers with lace scarves covering their curly grey hair.

I then started thinking about my own city in this way, Los Angeles. I’m pretty sure it would take nothing short of a miracle for Los Angeles to become European Cityesque, but what if it did? What would that look like? What if Los Angeles: VAST AND WIDE FRONTIER OF THE WEST was more like Los Angeles: the city of cities?

I wonder if we could ever learn to put the cars away, take the bikes out and use them as our main mode of transport? The less we have to carry around the better. In my mind there are two main parts of LA, The East Side and The West Side. The East side consists of Silver Lake, Los Feliz, Echo Park, and Hollywood. The West Side is Venice, Santa Monica and Culver City. Imagine each of these neighborhoods or groups of neighborhoods operating as self sufficient towns. They each have their own entertainment, their own restaurants and markets, they have their ownThen connect east side and west side with trains.

Would streets be more or less crowded? People would probably be happier. Communities would be more tight knit as you would see members of your community every day out on the street. I wonder what this would do for crime and racial segregation. I’m sure a lot of Americans would see this as a step backward. They  would never want to get rid of their cars. I wonder if there is a particular neighborhood that would be willing to carry out this kind of experiment.

So I was at the orthopaedic specialist’s office on Friday (this is another story entirely, that I’ll probably tell you later!) and began reading an article in Audubon magazine (which I had never even heard of before) that made me re-evaluate my recent eating habits.

In the past few months I’ve been rationalizing my consumption of meat, mostly just chicken and seafood.  I’ve been telling myself that free-range, organically raised chicken is okay. Beef is not. I can eat seafood if it’s on the Monterey Bay Safe Seafood list – still not sure where I stand on this issue actually. And other such excuses, but after reading the article, it confirmed my tinge of meat lovers guilt. I knew that making these little meat “allowances” meant I still wasn’t doing everything I could do to help the situation and the impact that raising meat is having on the climate crisis.

Honestly, I love meat, but I’ve chosen to refrain from eating it mainly due to the environmental cost of raising it. Originally I had decided to stop consuming meat after reading The Way We Eat: Why Our Food Choices Matter.  Before that I hadn’t realized how much of our resources we were pumping into meat production. Furthermore, the indirect costs of factory farming (excessive amounts of animal waste, CO2 production – as well as other heat trapping gasses) were just as detrimental to the environment.

As a ethical issue, the consumption of meat actually does not bother me. Humans are omnivores and were made to be able to consume meat, it’s a natural way of life. On the other hand, I do have a problem with the concept of “meat farms”. I don’t approve of chickens, cows, pigs, etc being cooped up in their tiny cages with poor living conditions and being grown like crops. It’s just not fair, sure we eat them but that shouldn’t be the entire life they are allowed to live.

I don’t know how I developed this “condition” but when I walk by the butcher case sometimes I replace the hams and beef cuts with human parts and I have to get far, far away from that part of the supermarket. Maybe I’ve watched one too many horror movies, maybe my subconscious is trying to make me stay away from it. Anyway, this then makes me think back to the factory farms and if I start replacing those animals, living like slaves, with humans then I feel a little sick about that too.

It’s been hard for me to not have a bite of something with seafood or chicken when I have dinner with my family or go to Dim Sum with them on the weekends. My family almost always eats Chinese food, and most Chinese food is heavy on the meat and it’s also delicious. It’s food I grew up with so it’s hard to not want to eat at least some of it and participate in the family meal. It’s also difficult when my family doesn’t quite understand the reasons behind my decisions. It’s kind of like in My Big Fat Greek Wedding, the mother of the bride says she’ll make lamb when the bride tells her that the groom doesn’t eat meat. They ask me what happens when I go out to dinner with friends, “What do you do? Are you eating? Do you just sit there?” as if restaurants don’t have vegetarian options.

Anyway, I realized that I’ve just been putting off doing what I know I should do and really stop eating meat once and for all. I want to do my part and also set an example as a meat lover who has stopped eating meat. Sometimes we have to make those sacrifices and this is one I am willing to make.

The Low Carbon Diet is the article and it’s available online if you want to read it.

I’m flying up to San Francisco on Thursday for Joss and Jeremy‘s wedding.

This is great because: 1. I love San Francsico, 2. I love Joss and Jeremy, 3. I get to hang out with Anja, and 3. I love going to my friends’ weddings.

This sucks because 1. I’ll be missing the open house event for the new EVO towers in downtown LA

and 2. I’ll be missing the D&A green market event.

Just checking in from Auntie Evelyn’s in New York. I just arrived this morning and so far I’ve done close to nothing. This is mainly due to an injury sustained earlier this morning when we went to get breakfast. I’m hoping my foot feels better by tomorrow, I don’t want to miss out on anything while I’m here.

I’m planning on checking out this telescope thing: http://www.tiscali.co.uk/telectroscope/home.php. Take a look around this store: http://www.ekovaruhuset.se/newyork.htm. And look for Terra Planas: http://www.yelp.com/biz/terra-plana-new-york

Also, I just wanted to touch on a few things that have been on my mind lately. Gas prices… are now averaging around $4.50 per gallon. There is alot of talk about food shortages, we haven’t felt it so much in Los Angeles, New York, San Francisco, etc. but areas all over the world are feeling it. The poorest are the ones who are suffering the most. The weather, the weather is definitely changing. The entire temperature of the Earth has increased and I don’t think anyone can really ignore that global warming is very real and has already started.

All these things freak me out. I don’t want to give up my way of life, as lame as it sounds. I know nobody does, nobody that has it nice anyway, but that’s what we are going to have to do if we don’t want to go out in a puff of smoke. It’s suddenly very real and right at our doorstep. It can no longer be ignored and I feel like every available resource that we have should be put to finding new ways to live and adapt in the new global environment we have created. We need to stop what is happening, reverse the effects if possible, and find the best ways to live with what we still have. I’ve decided to stop eating meatall together. One less meat eater = one less person demanding the resources needed to raise a cow, pig, or chicken. One less unneccessary cow, pig or chicken leaving a carbon footprint and a methane bubble. I need to start riding my bike more, not so much because I need to, I take the train everywhere (though I believe it still runs on fossil fuels as of right now), but to show my solidarity with bike commuters and encourage ridership. I’m getting all preachy and starting to sound like I know what I’m talking about.

Anyway, these are just some ideas I needed to get out. Talk to you later.

There were over 130 exhibitors crammed into (and a little bit out of) Barker Hangar in Santa Monica, CA the weekend of March 14- 16 as CA Boom held their annual trade show. This was the 5th anniversary of the show and my first time attending. The event caters to architects, designers, students, and fans of sustainable and innovative home design. Unfortunately, I wasn’t able to catch any of the panel discussions or project/home tours that were part of this event but I did browse the exhibit hall for a few hours and came across some great exhibitors.

Among the exhibitors featured was Varian Designs. This San Francisco furniture company takes reclaimed timber and turns it into architecturally inspired furniture. At their CA Boom booth they had two simple yet amazing items on display, a bench and a table. 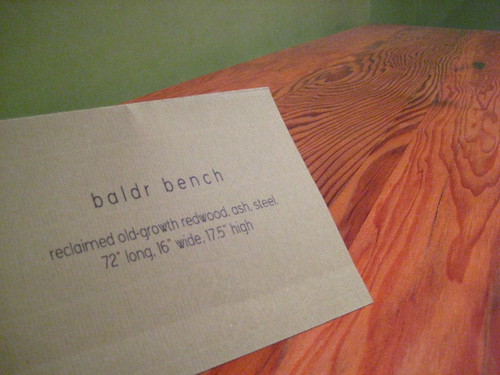 The pictures don’t really do them justice but these two pieces were easily my favorite items at the show. When I asked what was used to stain the pieces the booth representative informed me that the wood was taken from wine barrels that previously resided in a Napa Valley winery and the color comes from the wine that have been sitting in them for years. They’ve created something not only beautiful but also purposeful, without creating more waste.